Kashayam or Kwath or Qwath is  available in the liquid form and its one of the most potent presentation of medicines in the herbal treatment- Ayurveda. As per the formula in the classical texts, the raw herbs are collected, identified and cleaned properly and then then they are dried in the sun. Weighed quantity of ingredients as per formula is made in to coarse powder, mixed with sufficient quantity of water, well boiled and reduced to attain the proper specifications. Once ready ready the kashayam/qwath is properly preserved, tested and packed. 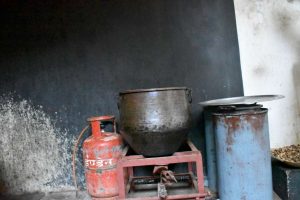 One part herbs (as per the reference in the classical books like Charak Samhita, Susrutha Samhita, Ashtanga Hrudaya, Sahasra Yoga, Bhaishjya Ratnavali) – is mixed with 16 parts water. Boil the mixture in mild fire till it has reduced to 1/8 and then filter the contents and use it with suggested anupanas. ( Anupanas are herbs in small quantities that are suggested to take along with the qwath to increase it’s potency) 48gms of Herb ( one pala) 768ml of water Reduce to 96ml Drink 48 ml at a time with appropriate anupanas. Shelf life of instant qwath is 6- 8 hrs only.

As most people find instant qwath preparation inconvenient,commercial manufacturers in the ayurvedic industry are making concentrated qwath, added with food preservatives. They come in bottled form and typically have a long shelf life of two to three years. The dosage can be fixed according to the condition of the patient and disease.

In the case of arishta a decotion of dried herbs is mixed with  aqueous extract or fresh juice made from the crude herbs and this nutrients/ sweeteners like  jaggery, honey or sugar are singly or wholly  added. Into the resulting solution certain fermenting aids like Dhataki pushpa ( Woodfordia fruticosa)  etc and prakshepa choorna ( Herbal powders) are mixed and kept in  fermentation vat for 30- 60 days.In this condition alcohol is self generated. It is then filtered and kept for settling. Such a preparation is called Arishtam. In the case of Asavas,herbs and juices are mixed in boiled water. Main difference between arishta and asava is that, there is decoction made in the case of asava. We can say decotion preparation is avoiced  to  stop volatility of herbal ingredients used.

Compared to asava, arishta has therapeutically higher potency. In the case of arishta , the liquid is clear with pleasant odor.

These preparations mature over a period of time the efficacy also increase. Normal dosage is 15 ml to 25 ml preferably after food.

The base of these preparations is either sesame oil or coconut oil. The process consists of addition of water extracts( kashayam), swarasa ( juice), kalka ( paste) subjecting the mixture prepared in a regulated temperature. The oils are prepared under the basis of references texts. So the medicated oils having the property and efficacy almost in the same manner since it contains the potent ingredients. It is used generally for inunctions and massage. Kuzhambu is a specialty preparation of Kerala. In this preparation the base is a special combination of sesame oil, castor oil and ghee in a uniquely blended manner. This is proven more effective than the same medicated tailam. The continuous use of Kuzhambu is more effective in the diseases which affect the bones.

The new herbs are collected, identified properly, then cleaned and dried. Each of the ingredients for powdering is pulverized separately and homogeneously mixed together as per the formula. Prepare the kashayam( decoction) or swarasam ( juice) or with warm water, mix it with jaggery/ sugar or sugar candy and concentrate to required consistency. The powdered raw herb is added as prakshepa choornam, well mixed and laced with ghee, honey as per text. Normal dosage is 10gms to 30 gms.

The ingredients are collected, identified properly then cleaned and dried. Each of the ingredients is pulverized separately and homogeneously mixed together as per the formula. These powders are used directly or with additives or used for making decoction according to the condition of patients and diseases.

The medicines from plant origin, animal origin and mineral origin are collected, identified properly and cleaned. The ingredients for making powders are to be dried and pulverized separately and then homogeneously mixed together and ground into the base as per the formula up to the proper consistency for making gulika. The medicines which require purification, are identified and purified as per the textual references and the purity analytically checked to ensure the medicine is devoid of side effects.

The process consists of addition of water extracts, Juice, Paste subjecting the mixture prepared in a regulated temperature. The medicated ghees are prepared according to reference texts, so medicated ghee has the property of the active and potent ingredients. It is also generally used for inunctions, tarpanam and massage.

6 thoughts on “Ayurvedic medicines- How are they formed?”