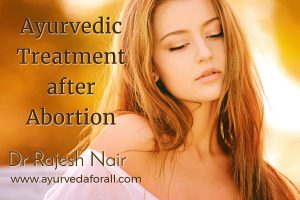 Abortion is the ending of the pregnancy, where foetus cannot survive in the external environment. The abortion occurred spontaneously is miscarriage and an intentional abortion is induced abortion. There are several laws in modern countries to regulate abortion and its social and ethical dialogues has started from time immemorial.

Induced abortion is performed either by medicines or surgical methods and its’ the safest medical procedure. However this procedure done by quacks reports death of more than 50000  in an year. A study says, 50 million abortions are done in last year and half were managed by untrained quacks causing serious threat to the health of millions of ladies.

The miscarriage is a medical condition and caused due to several aetiologies like  incompetence of cervix, debility of mother, hormonal imbalance, hereditary factors, physical exertion, stress etc.

Ayurveda have a unique concept of Tridosha ( Three somatic humours ) theory regarding the metabolism of the body. Every action of the body can be explained in terms of three humours- Vata ( Air), Pitt ( Fire) and Kaph. The health is the balance of these three factors and its imbalance causes the disease. The pregnancy is occurred in a unique combination of three factors and Vata holds the foetus, Kaph nourishes and Pitt converts. Any reason challenging this balance will lead to miscarriage and there is a clear Garbhini charya ( Daily routines of Pregnant ) to manage the balance and for a healthy progeny. There are some special food and decoctions for each month and this will enable smooth delivery.

Ayurveda compares the fertilization to the formation of fire from two pieces of wood by rubbing together. Atma or soul is entered in to the womb and by the association of Atma, the foetus becomes chetana ( active, conscious, living). The growth of the foetus month by month is explained in the Sarirasathana of Ashtanga Hrdayam.

The pregnant woman should avoid excess of sexual activities, carrying heavy loads, sleeping or awaking in improper timings, sitting on hard surfaces, grief, anger, fear, emotions, suppression of natural urges, controlling of desires, fasting, walking long distance, eating  spicy food, alcoholic drinks, meat, lying face upwards and panchkarma therapies. A pregnant women who involve in above said activities or due to other diseases, develops bleeding or stomach pain. After the embryo is get expelled, the women should be given drinks to pacify pain. Strong wine is recommended and it clears the uterine cavity and suppresses the pain. After that, soup of special rice processed with laghu panchmoola- Solanum indicum        ,Solanum xanthocarpum,Desmodium gangeticum,Uraria picta and Tribulus terrestris without any fat or salt is given. The herbs selected are easily digestible and promotes digestion.

After initial management, the women should be given Dipyakadi churna with ghee for three days. The decoction made of Katuka ( Picrorhiza kurroa), Ativisha (Aconitum heterophyllum), Pata ( Cissampelos pareira), Sakha twak ( Cinnamomum zeylanicum), Hingu ( Ferula asafoetida) and Teja ( Marsdenia tenacissima) should be administered in the same period. For next seven days, the women should be given medicated ghee and arishta ( Fermented liquid medicine) as per the reason of the miscarriage, tampon soaked in the decoction of Shirisha ( Albizia lebbeck) or Kakkubha (  Terminalia arjuna) should be inserted to the vagina.

The diet should contain easily digestible contents and soups are preferred in the first week.